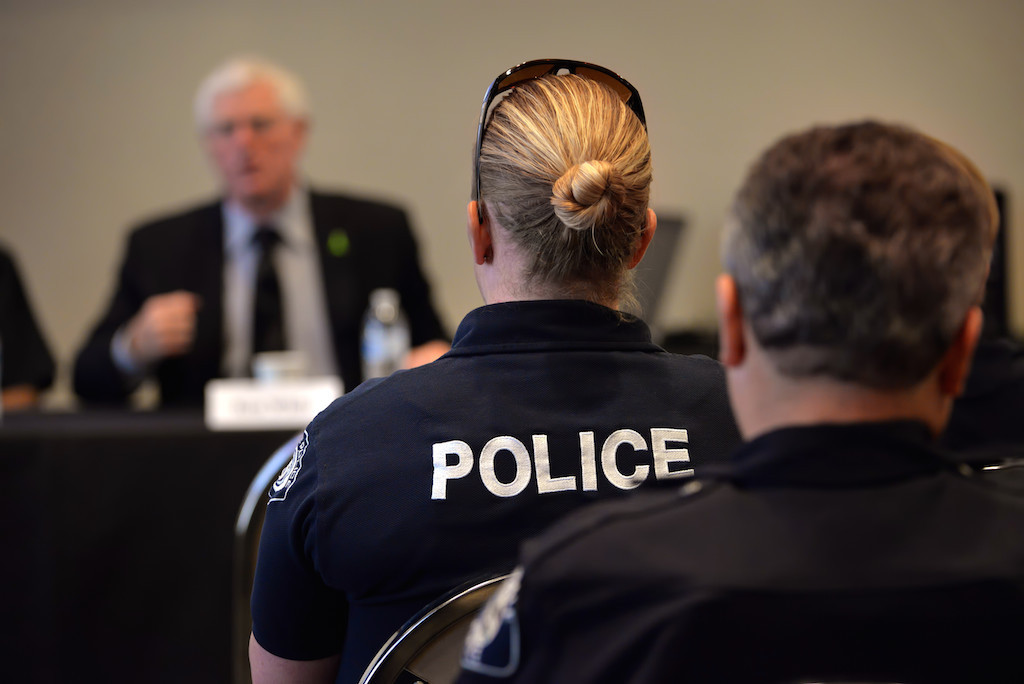 Posted at 18:05h in Community Relations by Embassy Consulting 0 Comments

Law enforcement from various agencies (and concerned citizens) attend a movie and panel discussion mental health and how they are handled by law enforcement at the Buena Park Community Center. On the panel, left, is Ken White, Board Member, National Alliance on Mental Illness (NAMI) Orange County. Photo by Steven Georges/Behind the Badge OC

Originally posted by Behind The Badge and Written By Greg Hardesty

The cops and other public service professionals settled into their seats to watch a full-length feature film, but this was no funfest at the local cinema.

The subject of the movie was dark as night, and the setting on a recent Thursday morning was a no-frills room at the Buena Park Community Center.

Nearly 70 public service professionals, including officers from the Anaheim and Garden Grove PDs and agencies as far away as Ventura and San Diego, as well as employees of the Orange County Sheriff’s Department, attended the four-hour symposium on a topic of increasing importance for law enforcement:

A panel discussion and Q&A session followed the movie, “It’s Dark Here,” which was financed by a Chino Hills couple and based on the suicide of their son following a sudden and harrowing five-day schizophrenic break. 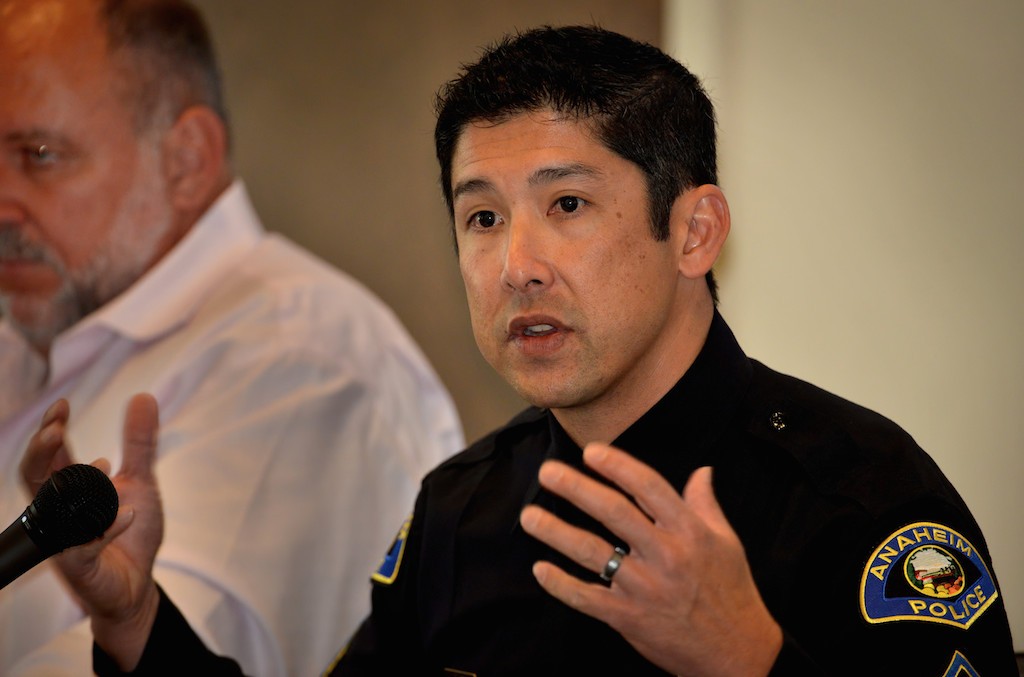 Darren Lee, Moderator and Police Sergeant for the Anaheim PD, sits on a panel discussion on mental health and how they are handled by law enforcement.
Photo by Steven Georges/Behind the Badge OC

Sgt. Darrin Lee, a 21-year law enforcement veteran who is in charge of the Training Detail, Administration Division, at the Anaheim PD, coordinated the awareness training — the fifth and final symposium since September.

“The point is to create awareness among law enforcement of people suffering from mental illness, and hopefully decrease the stigmatization of mental illness,” said Lee, whose sons attended the same junior high and high school of the real-life subject of “It’s Dark Here,” Jason Tennies, who was 20 when he committed suicide on Sept. 25, 2010.

“If we can do that,” Lee continued, “we can change the way we react to calls associated with the mentally ill and maybe decrease the chance of a suspect or an officer getting injured and reduce the chance of force being used — and maybe even save cities money and possibly save lives.”

Up until his break with reality, Jason was an accomplished musician, a black belt in karate and a math tutor who had been accepted into San Francisco State University. 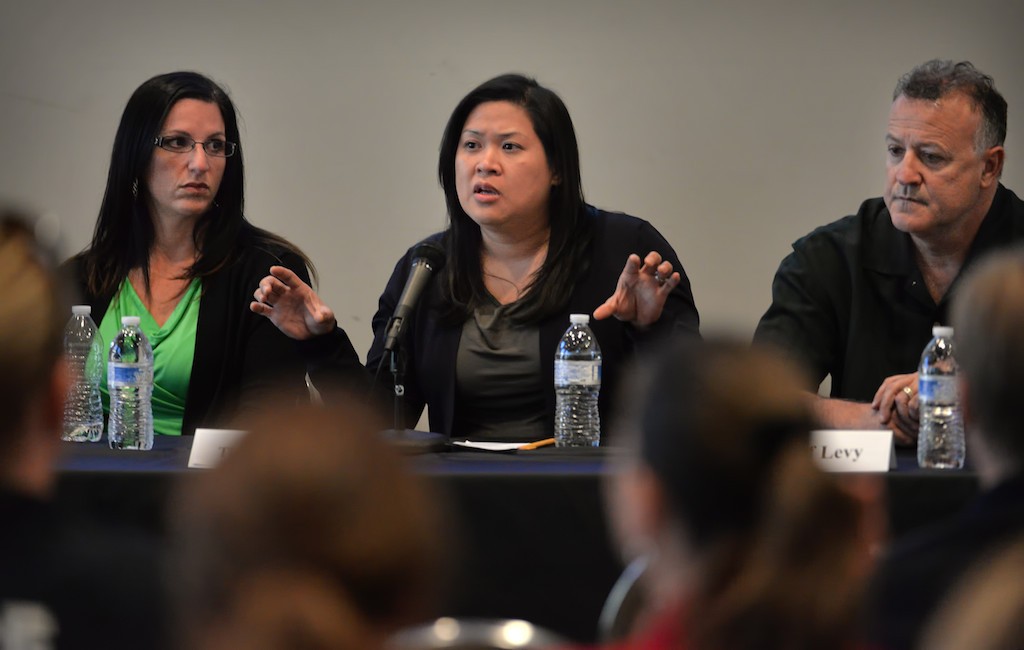 But over the course of five days, Jason became increasingly delusional and withdrawn and started hallucination and hearing voices.

His parents, David and Linda Tennies, took him to an ER, where a doctor recommended he make an appointment with a psychiatrist.

Because he was an adult, Jason had to make his own appointment — his parents couldn’t force him to see a mental health professional.

And because Jason had not explicitly threatened to kill himself or hurt someone else, he was not a candidate for a “5150” — a 72-hour, involuntary psychiatric hold during which specialists determine if someone is mentally ill and in need of medication or prolonged confinement.

“We took him to three facilities in that five-day period,” Linda Tennies said. “No one would admit him.”

Jason was scheduled to see a psychiatrist the day after he apparently stepped in front of an SUV late at night and was killed. 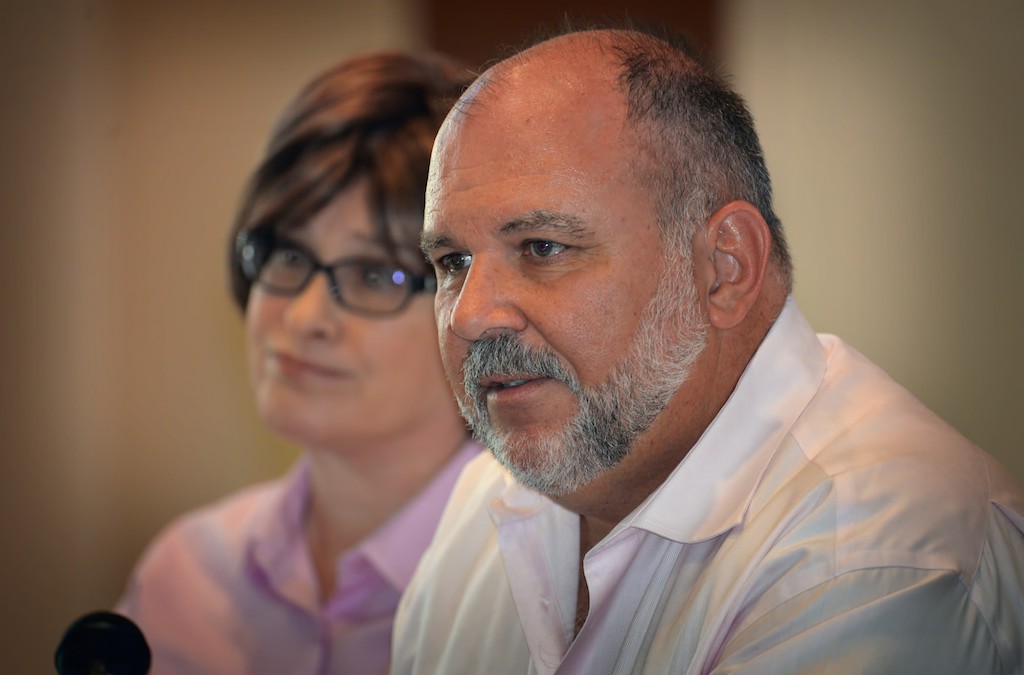 Linda and David Tennies, surviving parents and screenwriters of the movie It’s Dark Here, on a panel discussion on mental health and how the mentally ill are handled by law enforcement.
Photo by Steven Georges/Behind the Badge OC

Jason never had any encounters with police officers during those five days, but his parents believe it’s important for law enforcement professionals to become more aware of signs of mental illness during their encounters with the public.

That’s why the couple has been participating in Lee’s mental health awareness training symposiums, and why they plan to remain doing so with other law enforcement officials following a move soon to Northern California.

“One in four people suffer from some type of mental illness,” Linda Tennies said during the panel discussion. “It’s important to put a human face on this issue and understand the person you’re dealing with is someone’s precious child.”

David Tennies urged public safety professionals to be careful when engaging with someone who may have autism, bipolar disorder, schizophrenia or other type of mental illness.

“Their reality has nothing to do with what you’re experiencing,” Tennies said.

Lee, a use-of-force instructor since 1999, stressed he wasn’t urging cops to compromise their safety or toss out time-tested techniques when dealing with suspects. But he urged officers to look at use of force in a different way when dealing with the mentally ill. 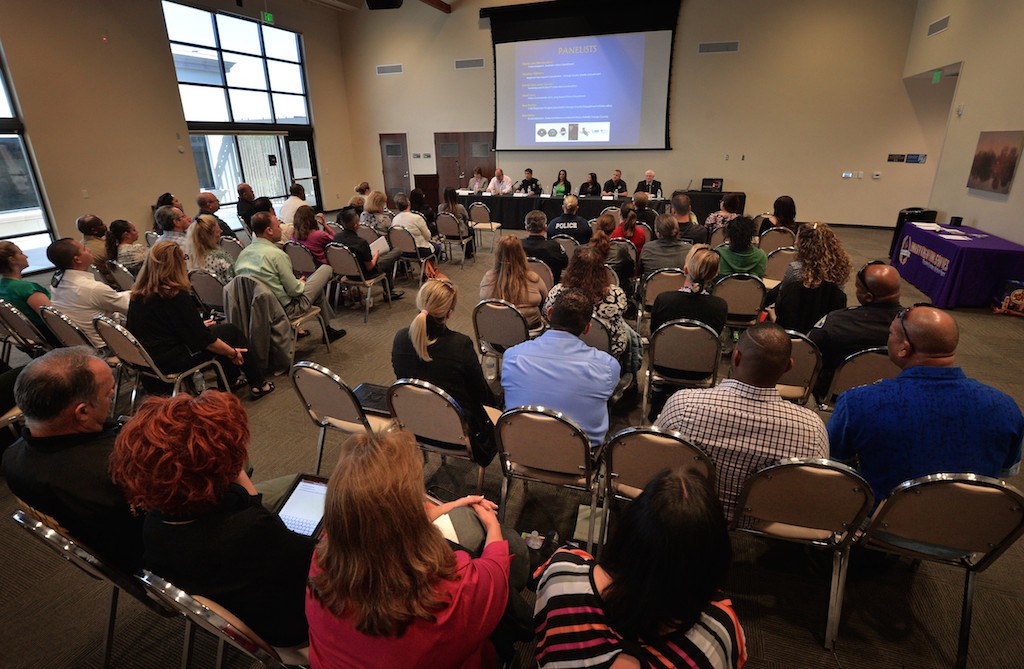 For example, Lee said, a mentally ill person may become defiant because he or she is not thinking rationally, compared to a suspect whose defiance stems from a rational desire to, say, get away or harm an officer.

“Police agencies in Orange County are paying more attention to providing training to cops in the area of mental illness,” Lee said. “There’s got to be something we can do differently.

“Instead of relying on our old approach to training, where incidents can become escalated in a linear way, it’s important to consider new verbal and non-verbal ways to deescalate contacts with the mentally ill,” Lee said.

Panel member Dr. Heather Williams, Regional Peer Support Coordinator with the Orange County Sheriff’s Department, stressed the importance of de-stigmatizing mental illness both within and outside of law enforcement.

Depression, anxiety, PTSD — cops commonly experience such issues because of the trauma they’re exposed to, but it’s important to address such issues “on the front end” through such tools as peer support before problems worsen, Dr. Williams said.

“When we learn to validate what they are going through is normal, and when we start to create a culture that encourages talking about such issues, we give permission for these people to be human beings,” Dr. Williams said.

Josef Levy, president of Embassy Consulting Services and another panel member at the April 16 symposium, has trained more than 5,000 law enforcement officers on dealing with the mentally ill during the last three years, including employees of the Anaheim PD and OCSD. 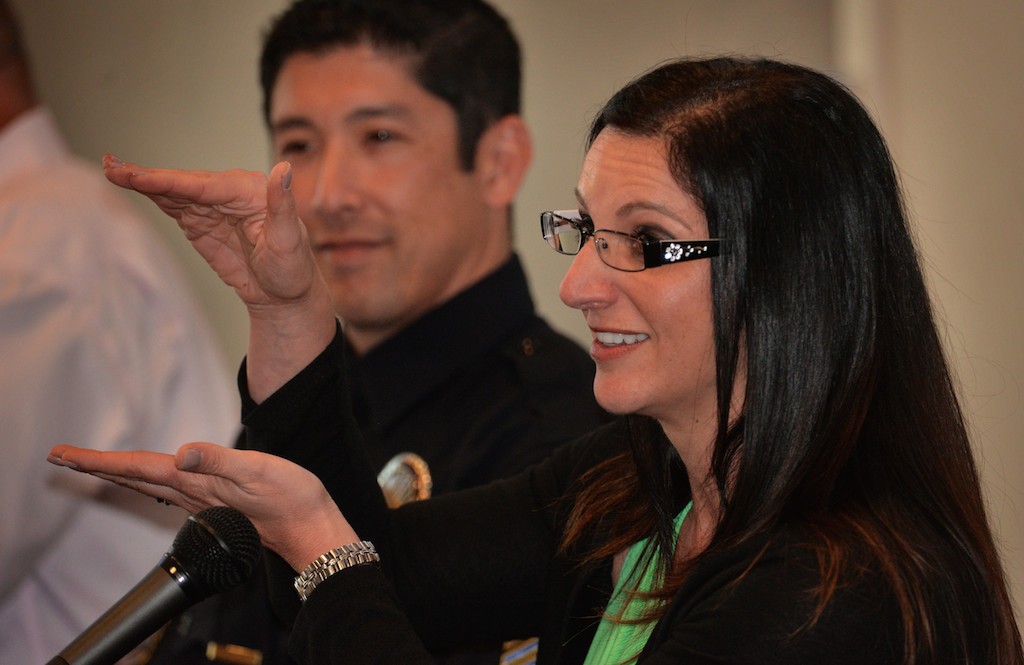 Dr. Heather Williams, Regional Peer Support Coordinator at the Orange County Sheriffs Department, on a panel discussion on mental health and how they are handled by law enforcement.
Photo by Steven Georges/Behind the Badge OC

“Police officers are not trained to retreat,” said Levy, who spent 28 years at the Long Beach PD, “but many times, when dealing with the mentally ill, it’s important to retreat to prevent situations from escalating.”

Ken White, executive director of NAMI (National Alliance on Mental Illness) Orange County, said that on any given day, there are an estimated 75 to 100 people on 5150 holds in Orange County — people that, in many cases, don’t get the help the need and end up back on the street and, in most cases, in encounters with police officers.

White said the statewide Commission on POST (Peace Officer Standards and Training) is looking at ways to channel more funding to train cops in how to best handle encounters with the mentally ill.

White also said the IACP (International Association of Chiefs of Police) recognizes the problem of suicides and mental illness in law enforcement.

He, like other panel members, realizes there are large gaps in the system of caring for the mentally ill in an era of deinstitutionalization.

“We need more resources and collaboration to leverage the resource we do have,” White said.

Attendees were impressed by the symposium.

“I found it enlightening,” said Det. Ed DesBiens of the Garden Grove PD. “I learned more about schizophrenia than I had known before, and was shocked to hear how quickly it can occur.

“There is definitely a lot more to learn, and I believe these discussions are a great start to determining a course of action law enforcement can take without jeopardizing officer safety.” 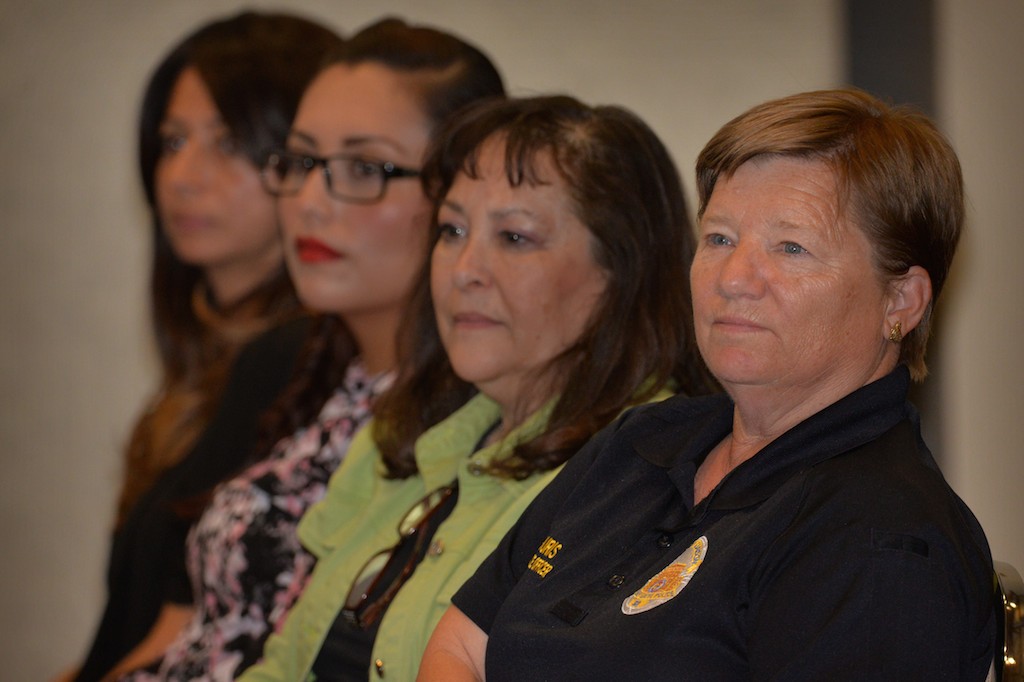 Kris Backouris, Community Service Officer for Garden Grove PD, right, attends a panel discussion on mental health and how they are handled by law enforcement.
Photo by Steven Georges/Behind the Badge OC 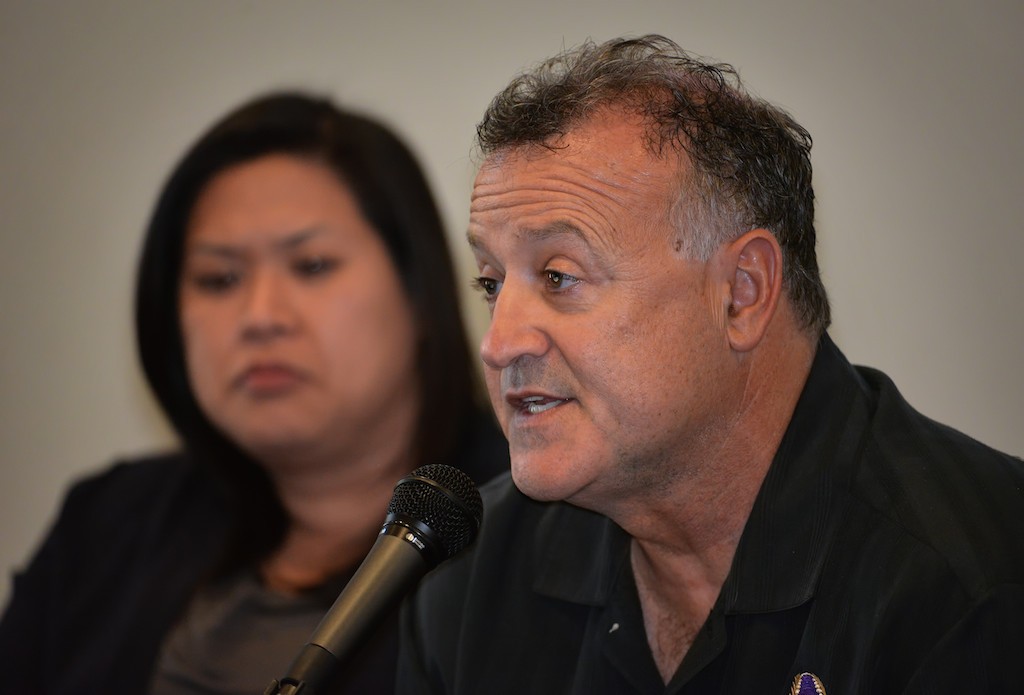 Josef Levy, former (ret.) Commander for the Long Beach PD, talks about how law enforcement can to better when dealing with the mentally ill. Behind him is Tina Rocha, Crisis Response Program Specialist, Orange County Department of Education.
Photo by Steven Georges/Behind the Badge OC