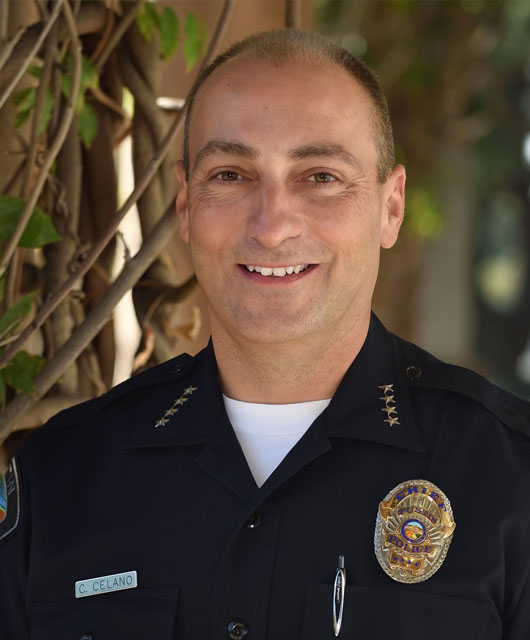 Retired Chief Charles F. Celano Jr. is a twenty-seven-year veteran of the Tustin Police Department. He worked his way up through the ranks to the position of Chief of Police. Over the course of his career, Chief Celano worked a variety of assignments including Patrol Officer, Field Training Officer, Street Narcotics/Vice Detective, Orange County RNSP Detective, Gang Unit Sergeant, Patrol Area Commander and the Captain in charge of each of the two Bureaus – Community Policing and Administrative Services.

During his tenure, Chief Celano contributed to the introduction of the Area Command system of policing, the creation and implementation of two Strategic Plans, and the creation of the award-winning Neighborhood Improvement Task Force (NITF). In addition, Chief Celano oversaw the arduous process of receiving national accreditation from the Commission on Accreditation for Law Enforcement Agencies (C.A.L.E.A.). The Tustin Police Department is the 3rd agency in Orange County, and the 11th agency in the State of California to receive this distinguished honor.

He is a graduate of the FBI National Academy, Class #258. In 2015, Chief Celano was the recipient of the Ambassador of Peace Award from the Violence Prevention Coalition for his work with the mentally ill. Chief Celano collaborated with a clinical psychologist to create a workshop that focuses on providing strategies and techniques for police officers, dispatchers, and other first responders to effectively communicate and interact with the mentally ill. Since its inception in late 2011, this training has received high praise and has been presented to over 10,000 first responders throughout the Western United States.